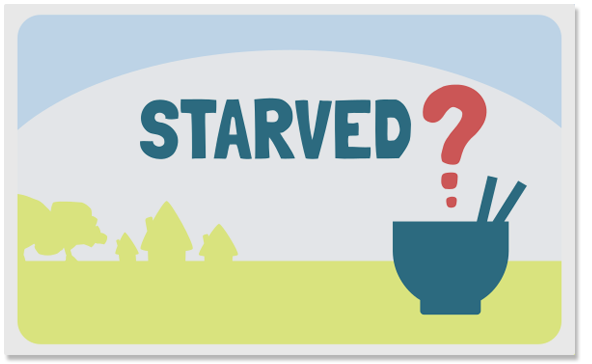 “Starved?” is a game of Simultaneous Action Selection in which you will take the role of a Chieftain in charge of the survivorship of a tribe of hunters-gatherers. Your task will be to get food from the wilds to build your village and make your people thrive.

There will be 4 to 6 tribes foraging on the same lands and they will have to coordinate in order to get the most out of it, otherwise they’ll starve to death.

The game takes place over the course of one or few years. On each of the 4 seasons, the fertile lands will offer different resources to the tribes.

As Chieftains, players will send their people to gather resources, fish or hunt to one of the 4 available locations. But beware, because too many people on the same location will scare the fishes away, too few, and you won’t be able to surround the wild beasts to hunt them, and the fruits of the land will be split among as many as they go to collect them.

Where’s the take? Resources are scarce and before sending your men, you and your mates only know the size or the type or resource that you are going to gather. The final intentions of your tribe are kept in secret from the rest of the players. So you can bluff, trick, be honest or just remain silent about what you plan to do. You’ll also have to develop a good judgement about what the others plan in order to get enough food to thrive.

On the fifth round all the tribes in the valley will meet each other to celebrate the Winter Solstice Festival, the Yule, where tribes gather in peace to decide for war. In silence, they’ll have to opt for one of the cards in the middle, but this time, they’ll have to select the same one without talking. If they succeed, the game will last for one more year. If they don’t, war will begin and the game will be over.

With the food you collect you will make your village grow, new members will increase your population and will bring with them useful skills like those of the hunter, the druid or the witch.

By the end of the game, the tribe with the most thriving village will win.

Below you can find the links to download the PnP versions of the game, one is full color and the other is printer-friendly so you don’t have to sacrifice all your printer’s cartridges just to test it.

You can download Starved? from its itch.io page as a single zipped file

The rulebook of the game:

The mat for the center of the table:

The rulebook of the game:

The mat for the center of the table:

As you see if you download the files, there is a bit of craftwork to be done, but not much, don’t worry. If you need some help, check the next page to learn how to assemble the parts.